This Sky-High Water Tower Doubles as a Rustic Beach Retreat

In this elevated home, every room is a room with a view.

In the 1940s, this Huntington Beach water tower — which stands at around 100 feet tall — serviced the local trains that came through town, connecting the inner city to the beach. Today, it’s a 3,500-square-foot high-rise with unmatched views of the Pacific Ocean, downtown Los Angeles and Catalina Island.

The historic and beloved water tower has long been a fixture of the Huntington coastline, but it was nearly torn down in the 1980s — until the local community pulled together and demanded it be saved.

“There was a huge community outcry to keep it,” said Scott Ostlund, the owner of the water tower home. “People were selling quilts and having meetings on ‘Save Our Water Tower.’”

Luckily, the tower was spared, and a local professor decided to turn it into a home in 1986. And in 2017, Ostlund purchased it and did extensive renovations, which were sorely needed.

“There was literally dust dropping from the termites in the ceiling, so it needed a lot of work. We went through and restored it after the buy,” Ostlund said.

A crew of 70 worked round-the-clock for three months to update the features and bring the water tower back to its former glory. The hard work and renovations paid off, and the one-of-a-kind-home will remain a neighborhood institution for years to come. Though the outside of the home still looks like the traditional structure of a water tower, the inside is cozy and rustic with 4 bedrooms and 3.5 baths.

Sprinkled throughout the home are artifacts of its past life of servicing trains, such as the barrels and burlap sacks decorating the first-floor bathroom as a nod to how trains carried cargo back in the late 19th and early 20th centuries. A tiny train track also hangs on the ceiling of one of the home’s lounge areas, giving the house a feeling of nostalgia and a sense of its history. 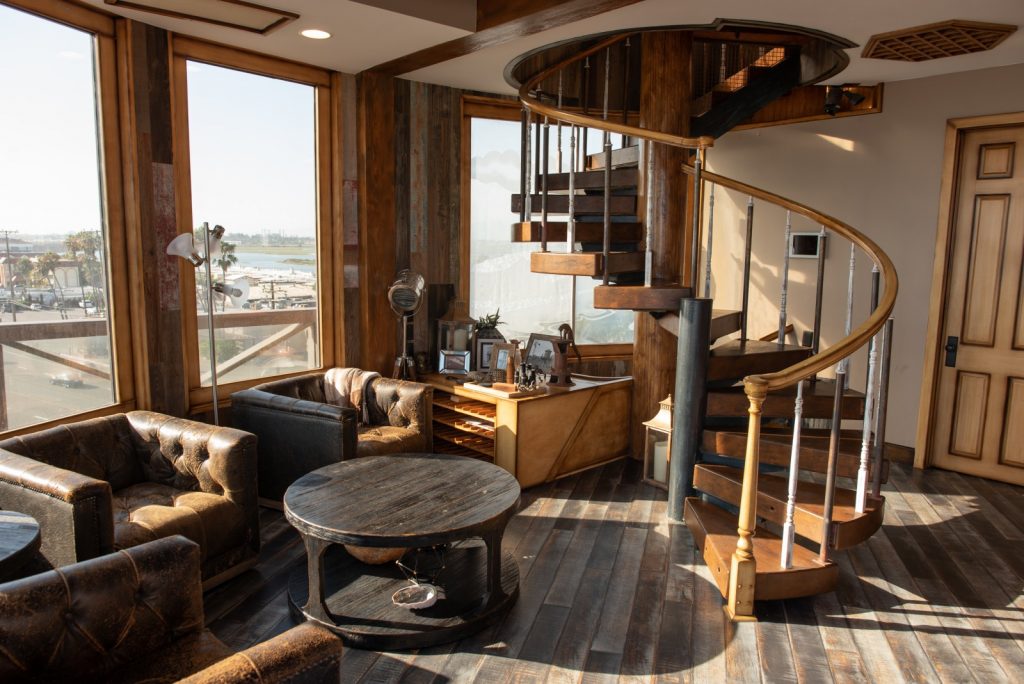 Beyond the historic details, the water tower’s living spaces are impressive: A lounge area boasts sweeping, panoramic views of the ocean… 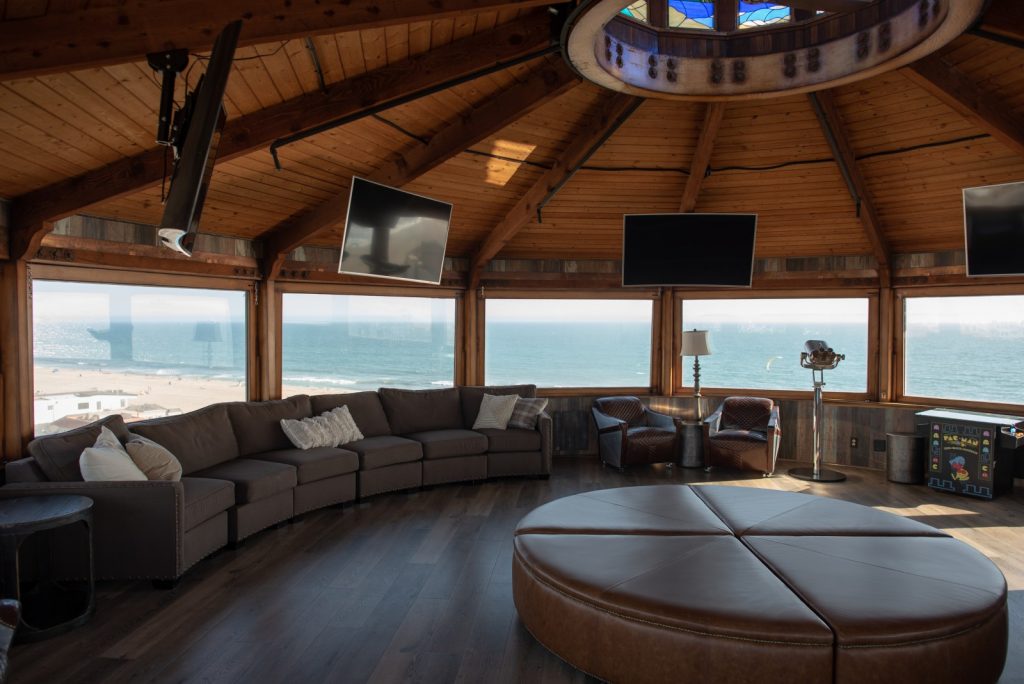 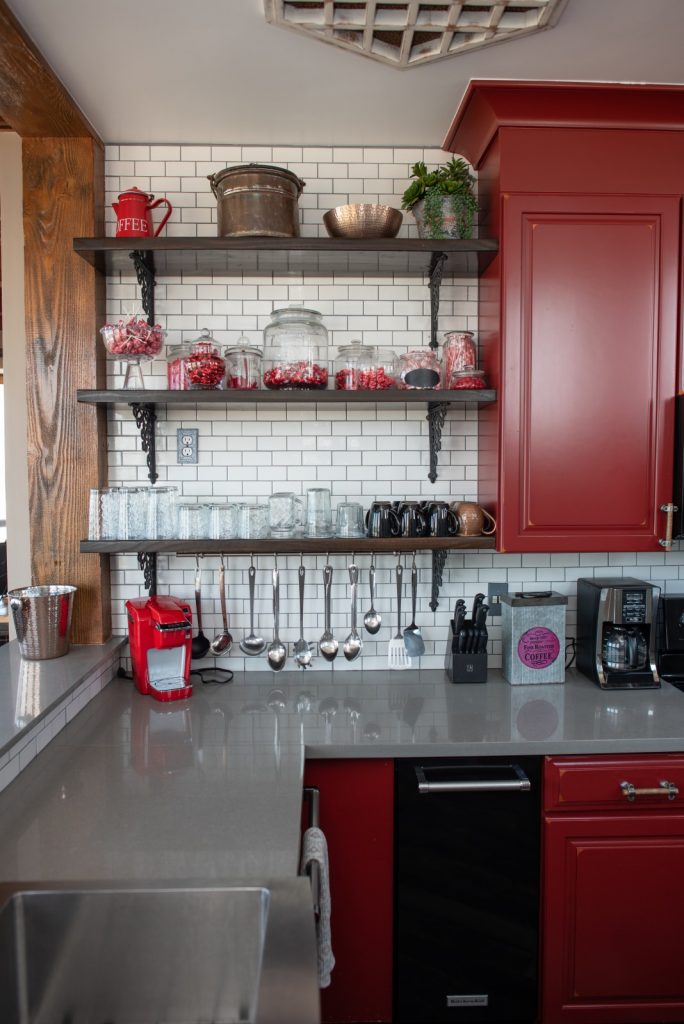 The sizable bedrooms upstairs have multiple windows that pop open, offering enviable and unobstructed views of the ocean right from the comfort of a bed. 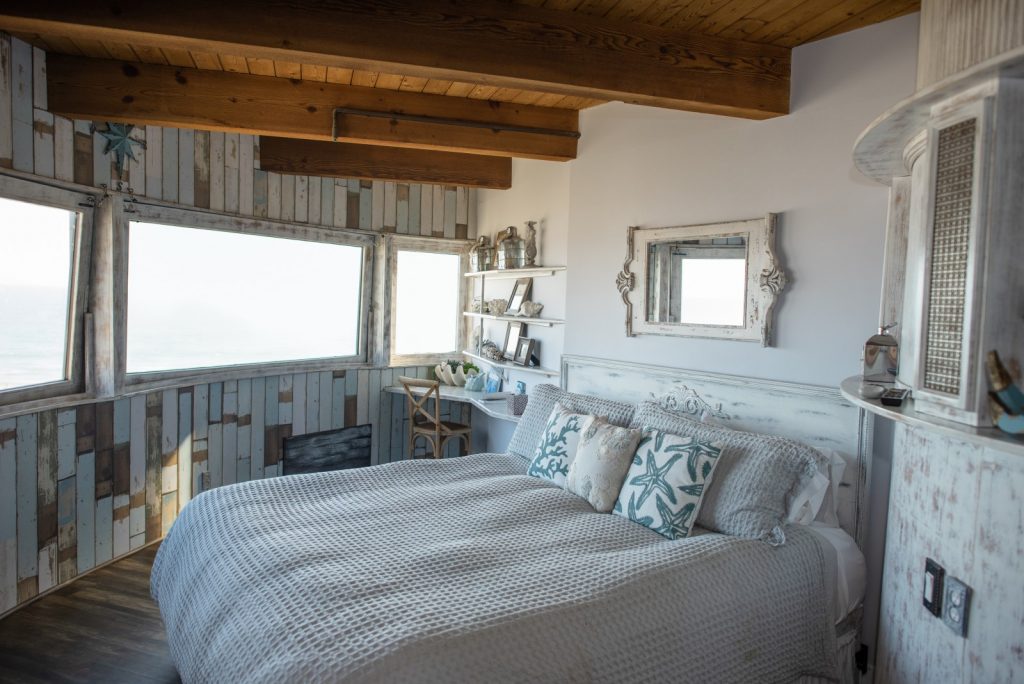 The water tower’s best feature, however, is its wraparound deck that’s perfect for sunset views, catching a good ocean breeze and soaking in the hot tub, which is conveniently located next to a built-in wine fridge and wet bar. 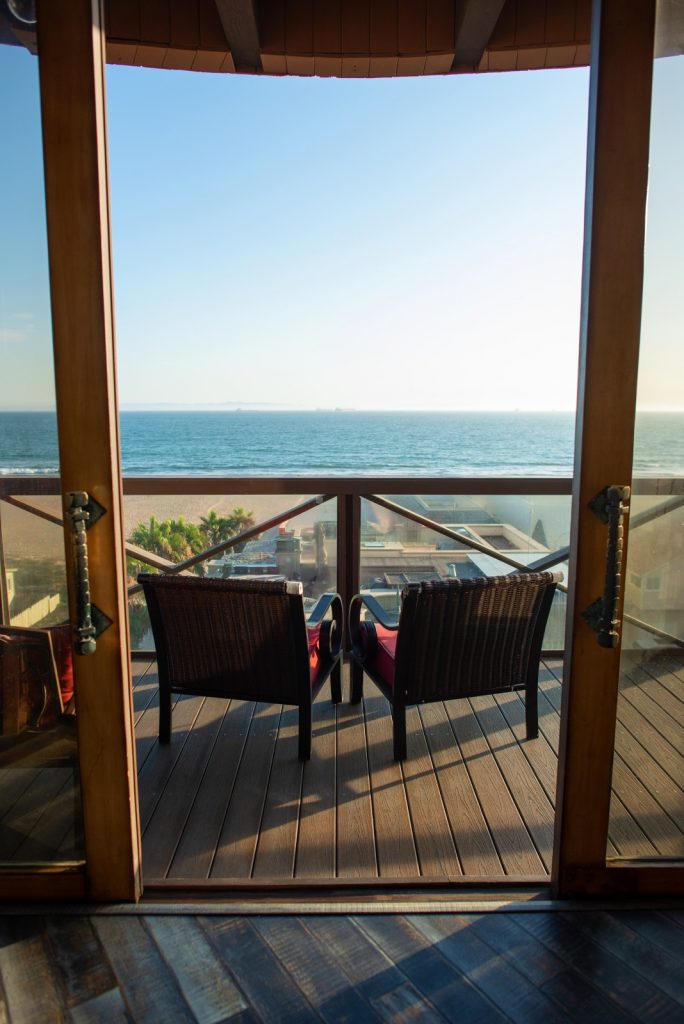 The novelty of a water tower-turned-home isn’t lost on Ostlund, who knows how unique it is to the area as well as the whole country.

“The value in the water tower is the permanence to build a house on the beach 100 feet in the air.  You look out over every other house in Southern California. There is no house that’s this tall in the country,” he said.

A Former Religious Retreat Remodeled As A Chic Family Home

Discovered on The Modern House: St. Francis House, a monastic retreat transformed into “an exceptionally chic modern home.” Located in Cambridgeshire, a 45-minute train journey from London, the late-Georgian structure was built as a country estate. It was in the 1950s that a religious order moved in and purpose-rebuilt the place as a silent retreat, stripping out just about all of  the original detailing and introducing, among other things, 22 spartan bedrooms on the second floor.

Ten years ago, when Anna Unwin and Willie McDougall spotted the property in a real estate listing, they were looking to relocate from London with their three daughters. Anna, who runs AU Bespoke, is an interiors stylist and sourcing specialist, and Willie is a developer—talents that enabled them to envision a new life for all 8,500-square feet.

They opened up the downstairs as a series of invitingly tranquil living spaces, and added one of the chicest pale pink kitchens we’ve come across. As for the upstairs monk’s cells, they converted those into five bedroom suites, glam bathrooms included. Their kids are now grown and the couple say they feel ready to roam—they both have business in Ibiza and plan to spend half time there—so their giant remodel is back on the market. Join us for a tour—and go to The Modern House if you’re tempted to move in.

Photography courtesy of The Modern House.

The roof tiles are Welsh slate, one of many details that look as if they’ve always been here but were in fact brought in by Anna and Willie.

The World War I brass bullet cases on the mantel are from Anna’s AU Bespoke collection.

Go to The Modern House to see more.

Here are some three more standout house transformations in England:

Stage a Space as a Calming Retreat

As the wellness trend gains popularity, more homeowners are looking at their properties through a new lens: a place to de-stress. “Mindful living” is a big trend for 2020, says Rebecca Snowden, interior style adviser at FurnitureChoice.uk. “The mindful living movement focuses on elevating our quality of life to ensure your home is somewhere you can go to unwind, relax, and refocus,” she says.

Introduce a quality of softness into the home. “Ultimately, the goal is to create a personal haven you’ll love going home to relax in,” Snowden says. For example, in the bedroom, a white wooden bed mixed with neutrals in varying tones adds interest and depth. Snowden suggests colors like white, soft gray, and “greige”—a blend of gray and beige. Also, select comfortable bedding with minimal prints to give an uncluttered, restful vibe. “Where possible, go with furniture that features curves and organic lines instead of sharp, straight edges,” she adds.

Surround the room in plants to add to the inviting look. “Choose a mixture of large and small greenery, including varieties that help clean the air,” Snowden suggests. “Leafy, trailing plants also inject a little wildness to create a tropical-inspired ambience.” Plus, plants can make the air fresher. Snowden also recommends picking furnishings that are made from materials like wood, rattan, or clay. “The warmth and rawness of their surfaces contribute to a design that has a soothing, back-to-nature vibe,” she says.

3. A corner for conscious relaxation

Stage a corner of a room for ultimate relaxation. “A little nook will do,” Snowden says. For example, consider making the space just large enough for a yoga mat or thick rug. For a home office, “if you have a work desk at home, it’s a good idea to carve out a ‘Zen zone’ within the same room for quick stretch breaks,” she says. Style the space in light hues, and include plenty of plants. Also, try to incorporate as much natural daylight as you can, she recommends.

Outside In: A Multi-Generational Retreat on Whidbey Island Welcomes Nature Inside

When architects Eric Walter and Steve Mongillo, principals at Seattle-based mwworks, were in the planning phase of this family retreat on Whidbey Island, they met often with the owners to go over their designs. Many times, the clients’ three adult children would attend—and, sometimes, even their teenage grandchildren.

Walter and Mongillo were unfazed by the unusual number of stakeholders who weighed in on their plans. The weekend home, after all, was to be for the entire family to use. And thankfully, there was consensus: What the family wanted was a design that was modest, low-impact, and respectful of the landscape outside its windows. Plus, of course, it had to accommodate their large group.

The two architects delivered with a series of three low structures that prioritize views of the forest on one side and a meadow on the other. The main building, which houses the public spaces (living, kitchen, and dining areas), is connected by a walkway to a wing of bedrooms; a separate bunkhouse for grandchildren and guests is just across a courtyard. (All told, the compound can sleep up to 20.)

“The project is designed to build memories and bonds for a large extended family for generations to come…. The senior owners set the project up so that regardless of what happens to them, the kids and their kids would always have the house to bring them together and continue building memories,” says Mongillo. Above: The view of the main building. In the forefront is the wing that houses the public living areas; the sleeping wing is on the far left. “The building footprint, as well as the construction process, took great care to preserve as many significant trees as possible, with foundation walls spanning and dodging critical roots so that the natural forest system would be preserved and allowed to thrive soon after construction was complete,” says Mongillo. Above: Views of the pond, red barn, and meadow where cattle (raised organically by the owners) graze, all on the owners’ 48-acre property. The custom windows are by Quantum. Above: A portion of the stone fireplace rests on the deck just off the living room, blurring the line between indoors and out. Above: On the deck, the fireplace transitions into a stone wall. A cutout in the roof allows for more light. Above: A slim kitchen is shimmied between the living and dining areas. Note that while the rest of the space features concrete flooring, here, wood planks are underfoot. Above: Just beyond the dining area is the entryway, which also acts as a junction between the public and private quarters. Above: The entry. Note the carved wood panel on display in the mudroom area. “Several of the interior doors and wall art are carved solid cedar slabs crafted decades ago by the family patriarch as a young doctor filling his time between patients, instilling a meaningful connection between the family’s past and present,” says Mongillo. Above: One of the bedrooms, simply decorated. Above: Zen perfection in the bathroom, which features a shower with a view. “The bathroom is one of our favorite rooms in the home! The soft northeastern light washing across the lightly textured plaster walls gives the room a serene quality,” says Mongillo. Above: The floating vanity in the bathroom. Above: Locally quarried basalt make up the courtyard wall and parts of the home’s exterior. This wood walkway leads visitors to the entryway. Above: The view from the bunkhouse to the main building. The bunkhouse sleeps up to 12 guests. Above: The structure was designed to recede into the forest. At the owners’ request, great care was taken to protect the trees on the property, often at the expense of expediency. Above: Just down the slope, near the pond, a fire pit for proper bonding by firelight.

This isn’t the first time we’ve featured a project by mwworks. Here’s another one: A Puget Sound Cabin That Rests Lightly on the Landscape.

This Dark & Dreamy Master Suite Is The Ultimate Retreat

Designer Orsi Panos shares a stunning master bedroom and bathroom she transformed into a relaxing oasis for her clients. See how a black statement wall in …

Any cookies that may not be particularly necessary for the website to function and is used specifically to collect user personal data via analytics, ads, other embedded contents are termed as non-necessary cookies. It is mandatory to procure user consent prior to running these cookies on your website.